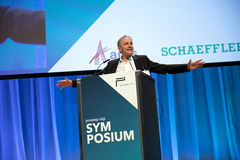 Darmstadt - May 2019. Trusted Networks provide Germany and Europe with the opportunity to build the next generation of global digital industry champions. That is the firm conviction of Karl-Heinz Streibich, President of the German Academy of Science and Technology  (acatech). The prerequisite is more collaboration in digital platforms and less data regulation, said Streibich at the symposium of the prostep ivip association. The acatech President acknowledged prostep ivip for pioneering such trusted networks: its success in standardizing Product Lifecycle Management (PLM) contributed – according to Streibich - greatly to the global success of the export champion Germany.

Germany still ranks in the top group of nations with the largest economic power, but the traditional Germany AG is losing value in the digital world, as explained by Streibich in his speech. Favored by large consumer markets and little data regulation the digital platforms of Amazon & Co. became operation systems for entire industries. However, Streibich is confident that German and European companies can win the second half of the digitization particularly in the industrial B2B business, if they react fast enough. In Streibich’s view it is easier for them to build digital platforms based on their domain expertise than it is for platform suppliers to emulate this expertise.

Streibich also notes, that this cannot be achieved on one’s own: large corporations in particular need to realize that economically stronger ecosystems, in which companies cooperate openly with one another, will prevail. „If DAX companies want to succeed globally with their own industrial IoT platform, each one alone will fail.“ said Streibich, promoting the creation of trusted networks and open data space communities: Europe-wide open data rooms within a clear legal and ethical structure for data usage – enabling especially medium-sized companies to reduce the gap in learning through large data sets.

Artificial Intelligence (AI) will be the innovation driver of the future, said Streibich. Platform economy and AI will reinforce each other, as they provide the opportunity to generate new insights and business models from data: „As long as we are not able to improve the balance between openness and data protection, we will turn others into restriction winners of the platform economy.“

Standardization is also playing an important role for the success of digitization in the field of B2B, according to Steibich. What the prostep ivip association achieved with PLM, must be extended to include industrial automation and manufacturing, where comparable standards don’t exist. Streibich encouraged the participants of the symposium to take on this challenge and offered the support of acatech.

The prostep ivip association is an internationally active network of manufacturers and suppliers from the manufacturing industry, IT vendors, and research organizations, based in Darmstadt. It dates back more than 25 years and currently has more than 180 members. The prostep ivip symposium is the world’s largest supplier neutral information event on the digitization of the product life cycle. This year the event was held in Stuttgart and was attended by about 700 participants from 18 countries.